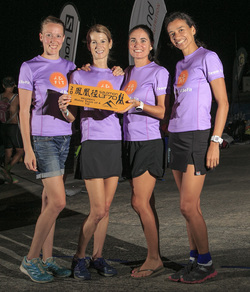 The official Lantau Trail has 12 Sections which the trail maps and apps will show.
The Salomon Lantau Trail 70 is divided into 4 sections. For race purposes we refer to Race Sections 1-4.

You can find the Lantau Trail info online at Enjoy Hiking HK. The Lantau Island Country Side Map is sold at the Lantau Base Camp, Central Post Office Gift shop and various hiking and running shops around Hong Kong. This is the most detailed map you can use and highly recommended for training and international participants.

Lantau Island (大嶼山) is the largest island in Hong Kong. Originally the site of fishing villages, the island has been developed in recent years with the construction of Tung Chung New Town on its north-western coast and the completion of several major infrastructure projects, including Lantau Link (1997), Hong Kong International Airport (1998), Hong Kong Disneyland (2005) and Ngong Ping 360 (2006).

With a land mass of 147.16 square kilometres (56.82 sq mi), it is the largest island in Hong Kong, almost twice the size of Hong Kong Island.

Lantau Island is often referred to as "the lungs of Hong Kong", because of its abundance of indigenous forest and relative scarcity of high-rise residential developments which characterise Hong Kong Island and Kowloon. The largest country park of Hong Kong, Lantau South Country Park is located on the island, which hosts two other parks, namely Lantau North Country Park and its extension. These parks cover slightly more than half of the area of Lantau Island.

The Ngong Ping Plateau features the Po Lin Monastery and its vegetarian restaurant, as well as the 85-foot (26 m)-high bronze Tian Tan Buddha (or "Giant Buddha") statue, once the world's largest seated outdoor bronze Buddha statue. Walkers can ascend from Tung Chung to the monastery in two hours. Visitors can also take a 25 minute ride on a Ngong Ping 360 from Tung Chung to the Ngong Ping Plateau. Ngong Ping 360 is a tourism experience which combines a 5.7 km cable car journey with a cultural themed village and easy access to the Tian Tan Buddha Statue.

Tai O is a fishing town located in the northwest of Lantau Island which is more than three centuries old. Tourists visit Tai O for its several hundred stilt houses, though many of those houses were damaged in a fire in July 2000. Tai O retains most of its historical setting such as waterways, stilt houses and fishing boats and it is famous for its fishing village scenery. Traditional Chinese food like salted fish and locally produced shrimp paste can be found there.

Over 50% of Lantau consists of national parks, including a large number of well-marked trails. The best known of these is the 70 kilometre, 12 section Lantau Trail.

The Lantau Trail (Chinese: 鳳凰徑), opened on 4 December, 1984, is a long-distance footpath on Lantau Island in the New Territories of Hong Kong. The 70 km trail is circular, starting and finishing in Mui Wo. The Lantau Trail has good visitor facilities along the way, and the route is well marked. There are information boards and maps at junctions between each stage. Distance Posts 500 metres apart help hikers know exactly where they are. At each turning, route signs give clear instructions about directions, place names, and the distances and times for hiking between various places.